Prof. Atta-ur-Rahman obtained his Ph.D. in organic chemistry from Cambridge University (1968). He has 1080 publications in several fields of organic chemistry including 751 research publications, 37 international patents, 69 chapters in books and, 221 books published largely by major U.S. and European presses. He is the Editor-in-Chief of eight European Chemistry journals. He is Editor of the world’s leading encyclopedic series of volumes on natural products “Studies in Natural Product Chemistry” 54 volumes of which have been published under his Editorship‎ during the last two decades. Eighty two students have completed their Ph.D. degrees under his supervision.

Prof. Rahman is the first scientist from the Muslim world to have won the prestigious UNESCO Science Prize (1999) in the 35 year old history of the Prize. He was elected as Fellow of Royal Society (London) in July 2006. He has been conferred honorary doctorate degrees by many universities including the degree of Doctor of Science (Sc.D.) by the Cambridge University (UK) (1987), Honorary degree of Doctor of Education by Coventry University UK (2007), Honorary D.Sc. degree by Bradford University (2010), Honorary Ph.D. by Asian Institute of Technology (2010) and Honorary Doctorate from King of Malaysia (University of Technology, Mara, 2011). He was elected Honorary Life Fellow of Kings College, Cambridge University, UK in 2007. Prof. Atta-ur-Rahman was conferred the TWAS (Italy) Prize for Institution Building in October 2009 in recognition of his contributions for bringing about revolutionary changes in the higher education sector in Pakistan. The Austrian government has honoured him with its highest civil award (“Grosse Goldene Ehrenzeischen am Bande”) (2007) in recognition of his eminent contributions. He is President of Network of Academies of Sciences of Islamic Countries (NASIC), Foreign Fellow of Korean Academy of Sciences, and Foreign Fellow of the Chinese Chemical Society. Prof. Atta-ur-Rahman has won the International Scientific Corporation Award by Chinese Academy of Science (CAS) for building scientific collaborations between China and Pakistan (2014), has been awarded prestigious “Einstein Professorship” by Chinese Academy of Sciences (CAS), 2013 and has been awarded highest award “Friendship Award of China” on September 28, 2014.He has recently been appointed as Consultant, Education Forum Asia (2015-2020) and Foreign Member of Chinese Academy of Sciences (2015).

Prof. Atta-ur-Rahman is the President of Network of Academies of Science in Countries of the Organization of Islamic Conference (NASIC). Prof. Atta-ur-Rahman has been elected as the President of the Pakistan Academy of Sciences twice from 2003-2006 and 2011 – 2014. He was the Federal Minister for Science and Technology (14th March, 2000 – 20th November, 2002), Federal Minister of Education (2002) and Chairman of the Higher Education Commission with the status of a Federal Minister from 2002-2008. Prof. Atta-ur-Rahman was the Coordinator General of COMSTECH, an OIC Ministerial Committee comprising the 57 Ministers of Science & Technology from 57 OIC member countries from 1996 to 2012. He is Distinguished National Professor as well as Professor Emeritus at Karachi University.

In recognition of his global outstanding services to the development of Science and Technology the largest university in Malaysia, University of Technology Mara, Malaysia UiTM, has established an institution entitled, “Atta-ur-Rahman Institute of Natural Product Discovery (RiND)” in 2013., The National University of Science and Technology (NUST) has also established an Institute “Atta-ur-Rahman School of Applied Biosciences (ASAB)” at their university in Islamabad in 2011.
Prof. Dr. Atta-ur-Rahman is the most decorated scientist of Pakistan having won four civil awards by the government of Pakistan, including Tamgha-i-Imtiaz (1983), Sitara-i-Imtiaz (1991), Hilal-i-Imtiaz (1998), and the highest national civil award Nishan-i-Imtiaz (2002). 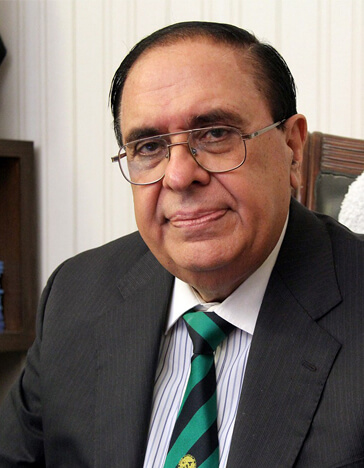